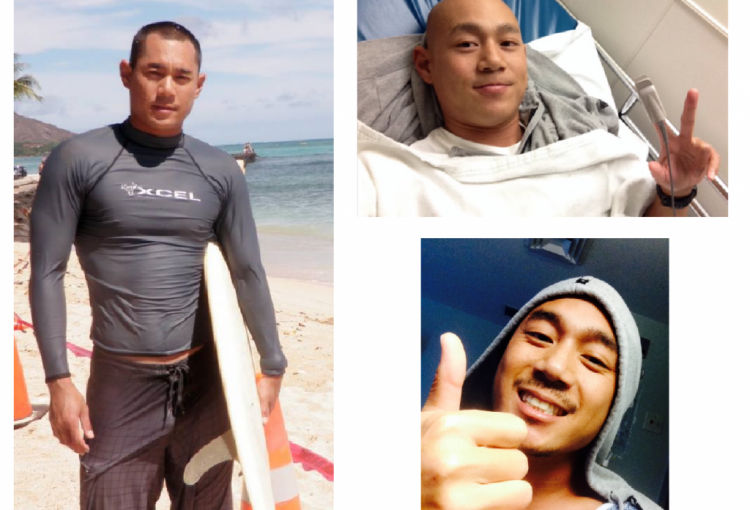 Alex Tung is a young Chinese-American surfer who was diagnosed with AML (acute myeloid leukemia) in June 2014.

In early June 2014, Alex was going on vacation to Hawaii to visit family and to surf along the ocean waters. Just before the vacation, he started getting headaches, which was odd for him. He also had some lingering bruising and red blotches on his legs. These symptoms continued to worsen during his vacation.

Upon his return, he started developing flu-like symptoms. He went to see his doctor for a regular check-up. Two days later, the lab results were in: immediately, the doctor knew what he was dealing with and rushed to diagnose Alex and get him started on treatment.

After a 7-day, 24-hour chemotherapy drip, Alex celebrated getting through his first round of chemotherapy. His immune system was completely depleted. He was unable to see many guests or even go outside as his body had no defense system to fight off disease if he were to get an infection.

The next week, doctors took another sample of his bone marrow to see if the chemotherapy had killed the cancerous cells. Unfortunately, there were still some cells left.

In early January of 2015, Alex was able to find a matching donor. He had his stem cell transplant on January 23rd, just a few weeks later. Alex is now recovering from the transplant. Alex, we’re wishing a swift recovery! All the best!

Although Alex has found his match, many Chinese patients are still looking for a matching stem cell donor, most likely from someone of Chinese descent. If you’re of Chinese or Asian descent, YOU could be a match to save a life. Sign up to be a donor now and share with your friends: