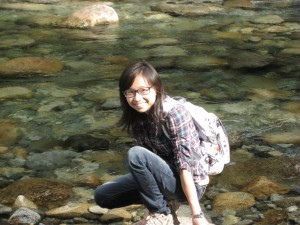 Judy Lam is a 22 year old patient who was diagnosed with Leukemia in 1999. She was only 9 years old when she started chemotherapy. Unfortunately, her leukemia has returned recently, and chemotherapy no longer works. Her last resort is to have a stem cell transplant.

I am Judy Lam. I am 22 years old. Before October, I was considered recovered from leukemia or commonly known as cancer of the blood. I was diagnosed with leukemia when I was nine. My family was still living in Hong Kong at the time. At first, they thought that I was just having bouts of flu. But it became apparent that it was not normal as the flu came more and more frequently. After a series of blood tests, I was diagnosed to have leukemia. I still remembered that both the medical personnel and my family were very tense. The clinic called my mom to have me brought to the Queen Mary Hospital right away. There, the doctor further drew another big tube of blood. Not knowing what was going on, I cried non-stop and tried to resist. That was my first difficult night in the hospital. The next day, the doctor explained the diagnosis to my family. The moment I heard that I had leukemia, I was very scared. The feeling was so real, so intense and so difficult to cope. Many questions came to my mind: Is it very serious? Am I going to die? What is death? What would happen to me when I die? Is death just like a lamp going out, as someone has suggested? Or is there a paradise and a hell? Where am I heading, to paradise or hell? The more I thought about it, the more scared I became.

The process of recuperating was a long one. Yet even after recuperating, the fear of death never went away. I am thankful that I had the opportunity of attending a Christian primary school and I got to know the Lord Jesus Christ. I knew where I was heading after death and my fear was lifted.

In February, 2003, my family emigrated to Vancouver. The move brought a mixture of emotions. I felt nervous, excited, lonely, and lost all at the same time. I was invited to the worships and fellowships at the Burnaby Pacific Grace Church. Brothers and sisters there showed their concern for me. Yet when I thought I could settle down, my leukemia reoccurred.

Learning that, I cried my heart out embracing my mom. I complained to God: why do I have to go through such difficult treatments again? I calmed down, knowing that God must have a reason for this, though I did not know what it was. I only knew that when Jesus walked with me, things would be more bearable. So that was my first recurrence of leukemia. In mid 2010, I became a volunteer in the Cancer Support Group in CCM. I was the youngest of the volunteers. We went visiting other cancer patients weekly and showed our concern for them. Sometimes we shared with them our experiences as fellow patients. I never thought that my suffering could turn to blessings for others. Each time when I visit and encourage someone to face cancer in a positive way, I am filled with joy which money cannot buy.

In November 2011, my leukemia reoccurred again. I was unprepared for that. As much as I would like to serve those who are in need, would I have the life and opportunity to do so?

We want to congratulate Judy on finding a match and wish her a speedy recovery.